Congratulations to the NY Giants and NY Giants fans. Unbelievable showing!!!! Yes, the Giants looked possessed on defense but did the Patriots look like an 18-0 team? I have a theory on this; read on.? Regardless I could have cared less who won the game, neither team is my team and I did not have money on

the game, but everyone loves the underdog and frankly I am so freakin tired of the the Patriots. Congratulations to Eli Manning MVP of Super Bowl XLII. I would like to offer up that there should be a co-MVP or at least adefensive player of the game should be named… can 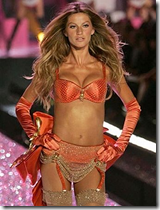 Gisele Bundchen co-MVP Super Bowl XLII  Maybe next year Tom Brady should leave Gisele at home. While she is not a bad trophy / consolation prize it may be a bit easier for Eli to share his trophy (The Vince Lombardi Tropy, shown here on the right) with the team and the fans. Congrats NY!