I had the pleasure of working with an application (referred to in the blog as APPX) that could use some serious TLC about a month ago. Apperently APPX is in wide use by isurance agencies and brokers. I 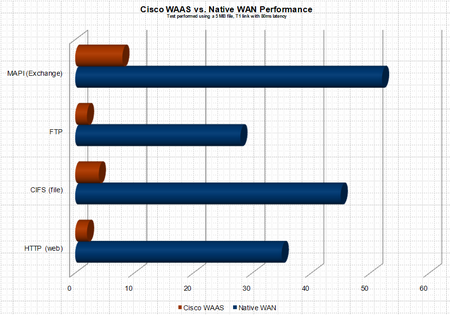 now know more about the interworkings of APPX than I want to know – and for the life of me can not figure out why the heck anyone would write an enterprise application ontop of the JET database, the answer I was given by the application developer is not everyone has MS SQL Server? OK – but if you are small enough not to have MS SQL Server (BTW – thats pretty freakin small) download MSDE it is free – or better yet why not use MySQL, Postgres, etc… anything but JET – ODBC, JDBC people it’s not 1972 :(. Here is how the saga began. A customer of ours was looking to remove file servers and print servers from 8 branch locataions. The articulated applications were standard CIFS shares and print services – a perfect fit for Cisco WAAS (Wide Area Application Services), a product which uses WAN accerleration technology and caching to remove WAN latency thus providing LAN like performane over the WAN.

The plan was to migrate the data from the 8 branch locations to a core location (the datacenter) and have the users access the data over the WAN. The customer would then be able to remove the server infrastructure and all associated management from the edge locations. Does not get any simpler than this, or so we thought.

A bit of background information. The depoloyment model for the CISCO WAAS gear was to use WCCP NOT inline cards to route the appropriate traffic through the WAE. Pretty early in the process we realized that the end users sitting in the remote location and accessing a SMB/CIFS share in core location were expeiencing huge delays from within the APPX, which was run from a network share and sort of a hyrbid client/server/web application. Fast forward 3 weeks, I finally show up on site to try and resolve a ghostly performance issue. At this point acceleration and caching of FTP, HTTP, CIFS, etc… had been fully vetted and verified as working properly. BUT APPX was still expreiencing significant performance issues. Immediately I began to believe it was an application specific issue – in the end the assuption was correct but lets explore how we identified the issue.

what the application does and the chronology of the steps.

The following are the notes/bullets taken away from the conversation with APPX developer:

As I mentioned above the APPX installation including the .dot and .mdb files were stored on a network share.

NOTE: Currently (prior to the WAAS deployment) when a new template is created the APPX directory is robocopied to network shares at the 8 remote locations. The new process would be to use a login script to copy the APPX install to the local workstations when an change is made. Pre-positioning could be used in this case to increase the prerformace of the initial load. Not only will this solve the performance issue but it also represents a significant improvement to the currrent process. The automation of updating the templates using login scripts removes the robocopy responsibility from the IT staff and ensures that the users are always operating from the latest database and templates.

Step 3: The actions taken to resolve the issue

Creation of scripts listed below to automate the required changes:

The logon scripts are located at \\core\netlogon

Ultimately to increase the speed of APPX the APPX Word document templates and mdb lookup databases will be moved from \\core\share\appx\database to c:\appx\database on the users localhost.

These changes dramatically increased the performance of the APPX, the belief is that performance problems were due to jet database related locking and lock release issues that were worsened due to WAN latency. During the automation process I did in fact verify that locks are placed on mdb files on a fairly regular basis. Initially I was told by the application developer, that the mdb files are not changed and locks are not placed on these files but this is not the case. Interestingly enough the APPX folks stated that most users are going to a more distributed model vs. a consolidated model. After understanding the application architecture it is not hard to understand why.

NOTE: 7-Zip has also been installed on the \\core server and is required

NOTE: Once all the users have logged on and their reg keys modified the regedit command can be removed from the logon.bat script.

So that more detail than I thought I would write. Obviously the actual application is not listed in the blog, but if you are interested in that app please send me an Email rich@bocchinfuso.net. I would be more than happy yo share more of the detail with you. Also if you find any typos, etc… in the post please leave a comment.

BTW- The customer has now been running for about 30 days and they are happy with the performance.